Changes in consumption practices are essential for the transformation of production systems. Faced with growing constraints on crop yields, reducing the consumption of animal products allows a much more efficient use of a territory's resources. Industrial livestock sectors must evolve towards high-quality, low-volume productions. It is also necessary to put at the heart of our diet products that are little or not processed, and to fight food waste.

Human nutrition is the result of a complex evolution involving many technical, political, cultural and religious factors. Eating practices are therefore constantly evolving according to the deployment of new agricultural techniques, the domestication of new species, moral or religious bans, or - more recently - the influence of the sector agrifood.

Historically, large agrarian societies have been built on the combination of a cereal (wheat, rice, corn) and a legume (lentil, broad bean, bean) in their diet . This common characteristic is neither a matter of chance nor a deliberate choice, but a process of selection. This type of diet provides the basis for a balanced nutritional intake, while limiting the resources necessary to achieve it (work, land areas, soil fertility). Until the beginning of the 20th century, the diet of the French was no exception to this rule: it was based mainly on bread (wheat and rye), pulses (lentils, beans) and potatoes.

With productivity gains and the emerging industrialization of the food system, the diet has gradually become enriched and diversified: the average calorie intake has increased from 1,800 kcal per day in 1800 to 3,200 kcal in 1900, freeing the French from the risk of food shortages and famines. Fruits and vegetables saw their per capita consumption quadruple between the end of the 18th century and the middle of the 20th century.

Then, since the middle of the 20th century, the green revolution and the rise of the agro-industrial model have transformed our diet:


- Foods historically reserved for elites, such as sugar, coffee or cocoa, have become democratized;
- Per capita consumption of meat, fish and more generally animal products has increased dramatically, especially since the 1930s (Figure 32). 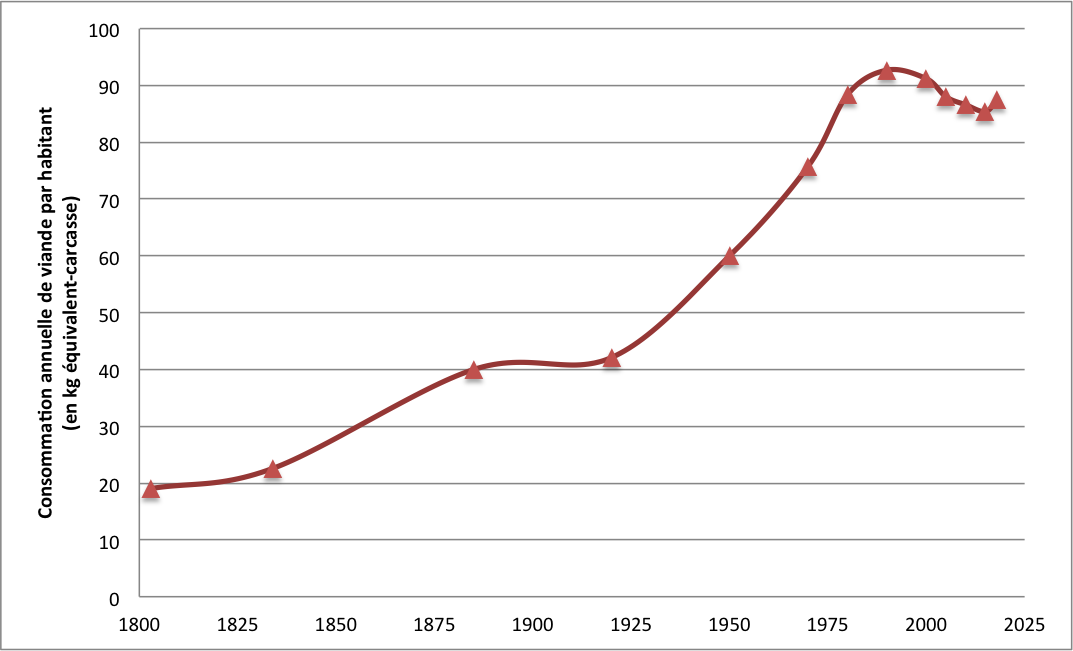 For the past ten years, life expectancy in good health has stagnated at around 63 years. Globally, nearly 1.9 billion adults are overweight, and 650 million are obese. There are more deaths today from being overweight than from undernourishment. In France, the obesity rate fell from 6.5% in 1991 to 15% in 2012 among adults, and almost half are overweight . The increasing consumption of ultra-processed products, often high in sugar and fat, is a risk factor. These foods now represent between a quarter and a half of the calorie intake in industrialized countries.

In addition to its deleterious impacts on public health, our diet is very inefficient. In particular, the production of food of animal origin consumes a large part of the resources compared to its contribution to our food. The production of meat, milk and eggs mobilizes 85% of the agricultural land necessary for our food (Figure 33) . Half of these areas are made up of permanent meadows that cannot be exploited other than by ruminant breeding, and half of temporary meadows, fodder crops, cereals or oilseed crops that compete with other crops in the allocation. arable land. 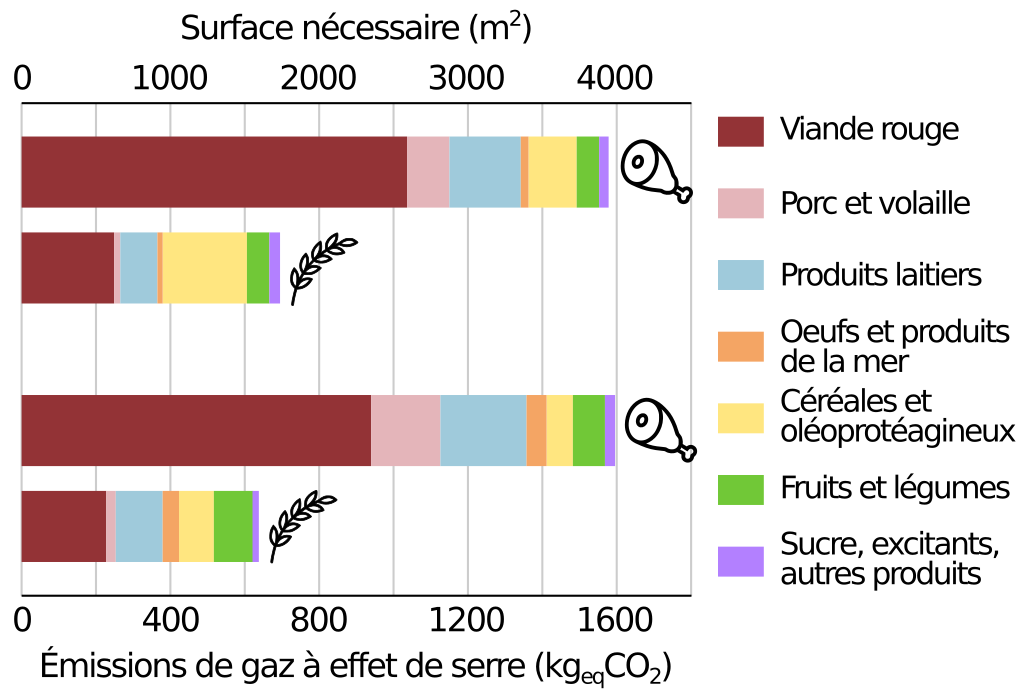 In total in France, 60% of cereal production that is not exported is used for animal feed (Figure 34) .

Farm animals add value to certain agricultural by-products, such as oil cakes, cereal bran or beet pulp. However, they return much less calories (and protein, in most cases) to humans in the form of meat, dairy products or eggs, than what could be directly used to feed us in the cereals allocated to them. food. In the event of constraints on overall plant production, competition between human food and animal feed would be accentuated . 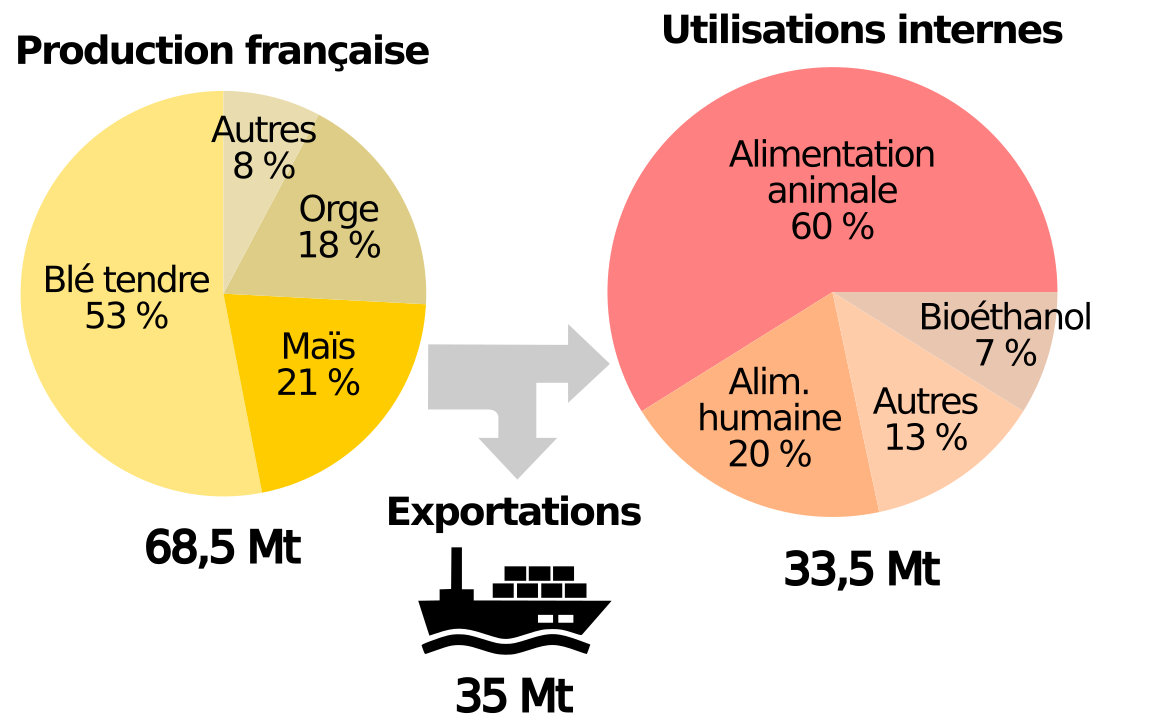 Figure 34 : French cereal production and its uses. Figures are in millions of tonnes (Mt) of grain or grain equivalent (for processed products). Other uses include seed, industry, waste, etc. Source : Les Greniers d’Abondance, from Passion Céréales (2018).

In addition, livestock is the source of nearly 90% of greenhouse gas emissions from agriculture (Figure 33) and its recent intensification poses many problems of pollution of aquatic environments by nitrates and phosphates, animal and human suffering, and health security.

Factory farming is today very much in the majority in France:
- 99% of the 52 million turkeys slaughtered each year are raised without access to the outdoors;
- 75% of the 49 million laying hens are reared in battery cages (code 3 on eggs) or without access to the outside (code 2);
- 99% of the 30 million rabbits are reared in battery cages;
- 95% of the 24 million pigs slaughtered each year are raised on slatted buildings.
Today, around eight in ten animals have spent their lives in high density buildings with no access to the outdoors. These practices are the source of large-scale animal suffering. Farmers and slaughterhouse workers also suffer chronic suffering, more or less repressed, in the face of productivist injunctions from the agro-industry. The industrial farming model increases dependence on external factors of production (animal feed, complex equipment, energy) and the indebtedness of farmers. It breaks with traditional breeding, which made it possible to optimize the resources and agronomic performance of farms. In addition to being condemned by the majority of society, factory farming is proving to be very unresilient in a context of various and unpredictable climatic, biological, energy and economic disruptions . Intensive breeding of broilers in Vendée. In France, factory farming is the majority. Crédits : © L214.

Most of the threats described in this report and their combined effects will have negative consequences on agricultural yields. While the development of agroecology, the selection of suitable varieties or the recycling of nutrients can partially compensate for this decline, a constrained and gradual decline in crop production is nevertheless foreseeable. In addition, the risk of exceptional agricultural crises sharply reducing production is likely to increase.

In this context of global contraction in production, trade-offs will have to be made between animal and human feed . Specialized farms - whose economic situation is already difficult for the most part - are likely to be the most vulnerable farms.

We must now take into account the predictable yield reductions as a result of climate change, the collapse of biodiversity, soil degradation and the scarcity of mineral fertilizers. Meeting our needs with declining agricultural production is possible: this requires in particular prioritizing agricultural production to food consumable by humans rather than farm animals .

Sustainably adapting our food systems requires acting on both supply (production) and demand (consumption) in order to avoid the effects of postponements (exports or imports). The transformations to be carried out have a dual effect:
- Put an end to industrial breeding and reorient the sector towards quality productions and lower volumes (as was the case for example for wine production) which focuses on meadows and by-products of the transformation;
- Replace the majority of animal proteins in our diet with vegetable proteins. According to studies, a diet that makes it possible to optimize the consumption of resources while satisfying the nutritional recommendations of the WHO, would amount to reducing by 50 to 80% the proteins of animal origin in our food, and to replace them by vegetable proteins,;
- Limit as much as possible the share of food consumable by humans in animal rations;
- Favor the consumption of local, seasonal and minimally processed products.

Concerning food consumption, the main levers of action for communities are at the level of collective catering . They can use this skill to make users and the population more aware of resource-saving diets and to structure channels for promoting local productions.


- Drastically reduce the proportion of animal proteins on plates, beyond regulatory obligations , and restrict food of animal origin to products from extensive farming, if possible under label. In addition to increasing the number of vegetarian menus - which a large majority of French people are in favor of - it is also possible to reduce the portions of animal products in non-vegetarian menus. A 75% reduction in animal products can thus be achieved by only "removing" one or two meals with meat per week;
- Replace these animal proteins with legumes and whole grains, the combination of which provides a balanced protein intake.
- Train cooks and canteen managers . Network the kitchens in transition, and provide training in vegetarian and vegan cuisine. 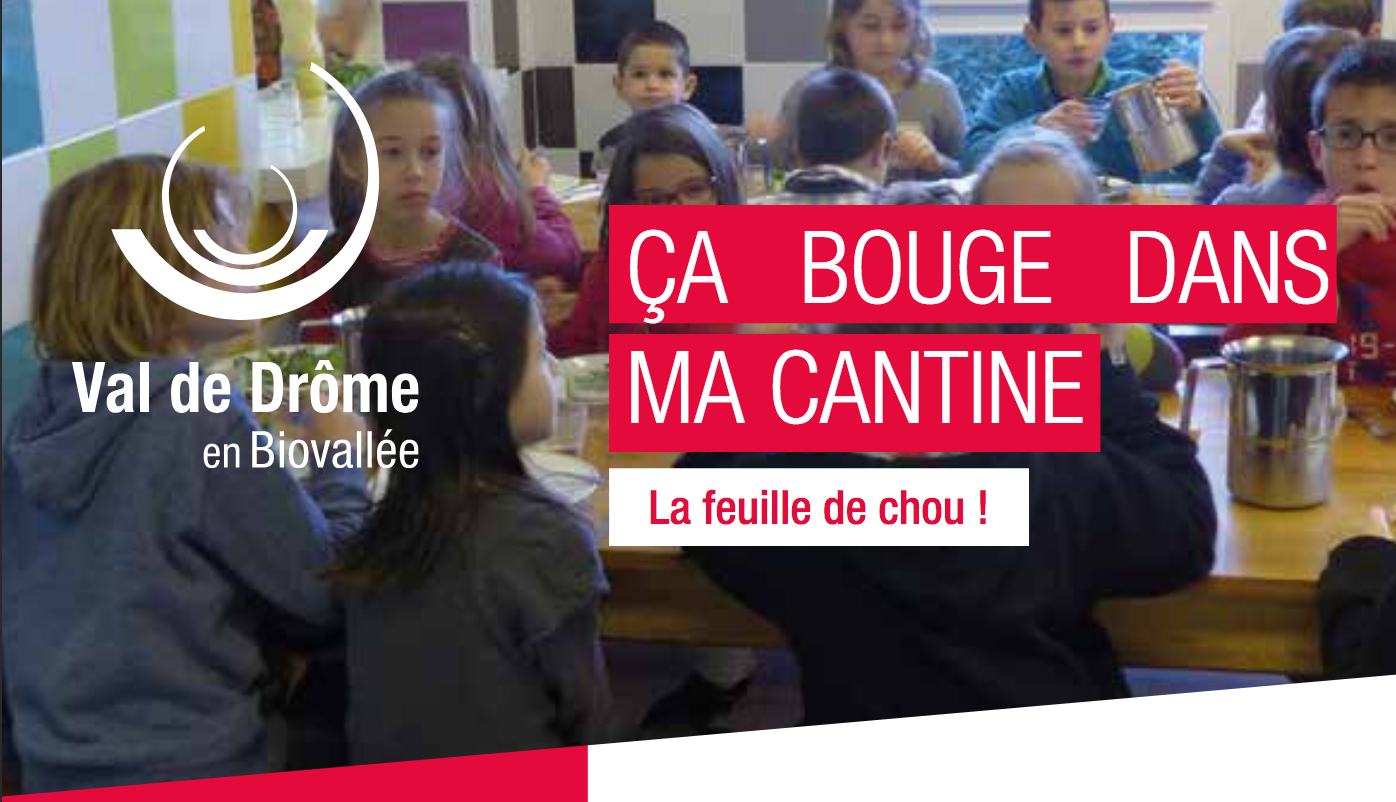 The Community of Commune of Val de Drôme has launched the program “It moves in my canteen”, which includes work on supply and logistics, training for cooks, activities for children, setting up gardens. educational programs, and meetings with farmers. 40 of the 45 intermunicipal municipalities are involved in the process, and many of them have greatly increased the share of organic and local products in collective catering. Credits: © CCVD.

The inefficiency of our diet is also manifested in the quantity of food lost or wasted, representing in France about 20% of potentially edible production . While some of these losses are difficult to avoid (accidents or contamination during storage, transport or processing), most can be reduced, in particular at the level of consumption.


-Reduce as much as possible the proportion of highly processed products in menus;
-Weigh organic waste to quantify and monitor waste development. 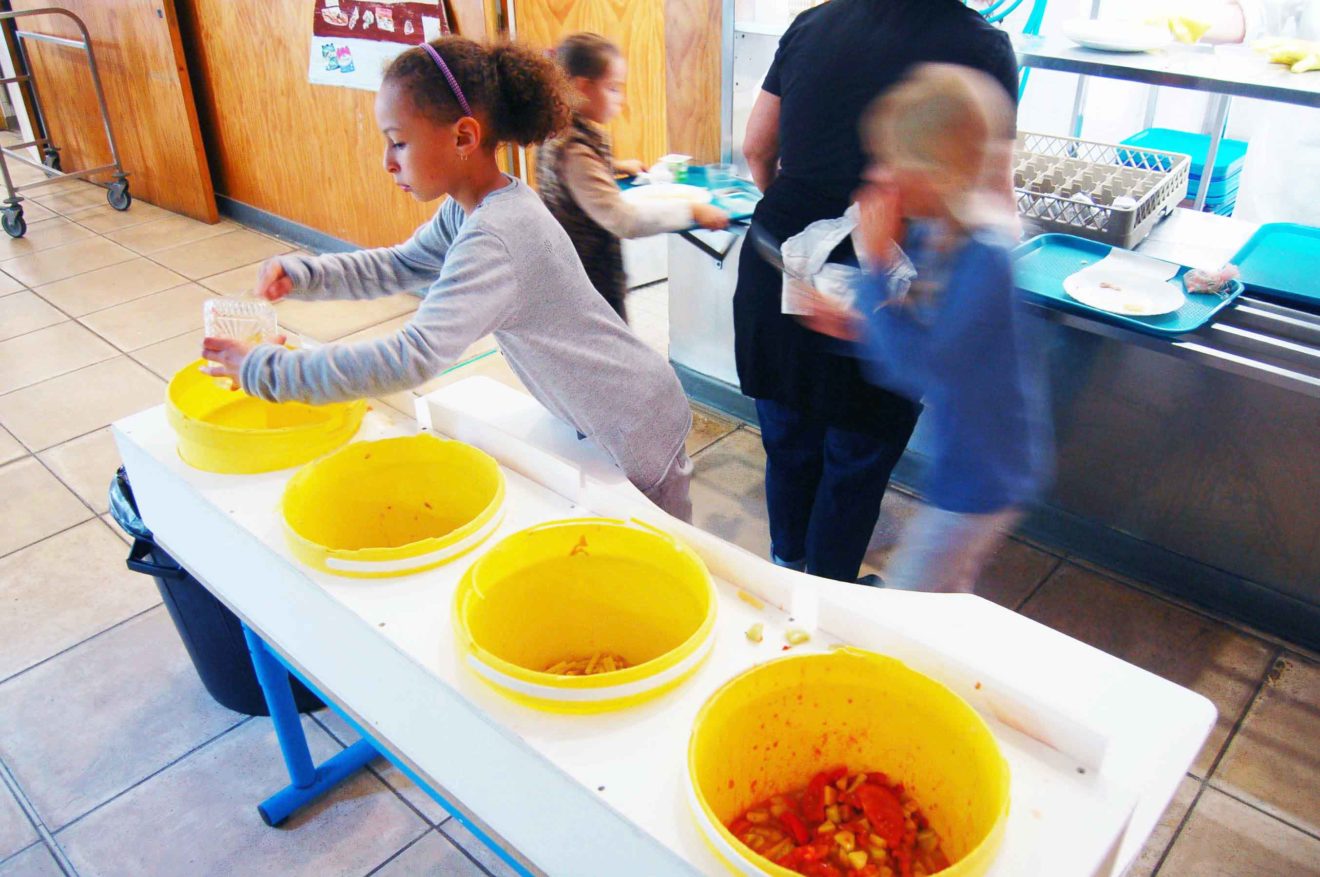 The commune of Mouans-Sartoux (Alpes-Maritimes) has carried out a program to reduce food waste. In four years (2011-2015), canteens have gone from 147 grams discarded per plate (i.e. a third of the food, national average) to around 30 grams. To achieve this 80% reduction, the city is carrying out awareness-raising work. Each day, children are invited to sort out leftover meals themselves. The buckets receiving the leftovers are then sorted and weighed, and the numbers recorded. Menus and commands are then adjusted accordingly. Crédits : © Mouans-Sartoux. 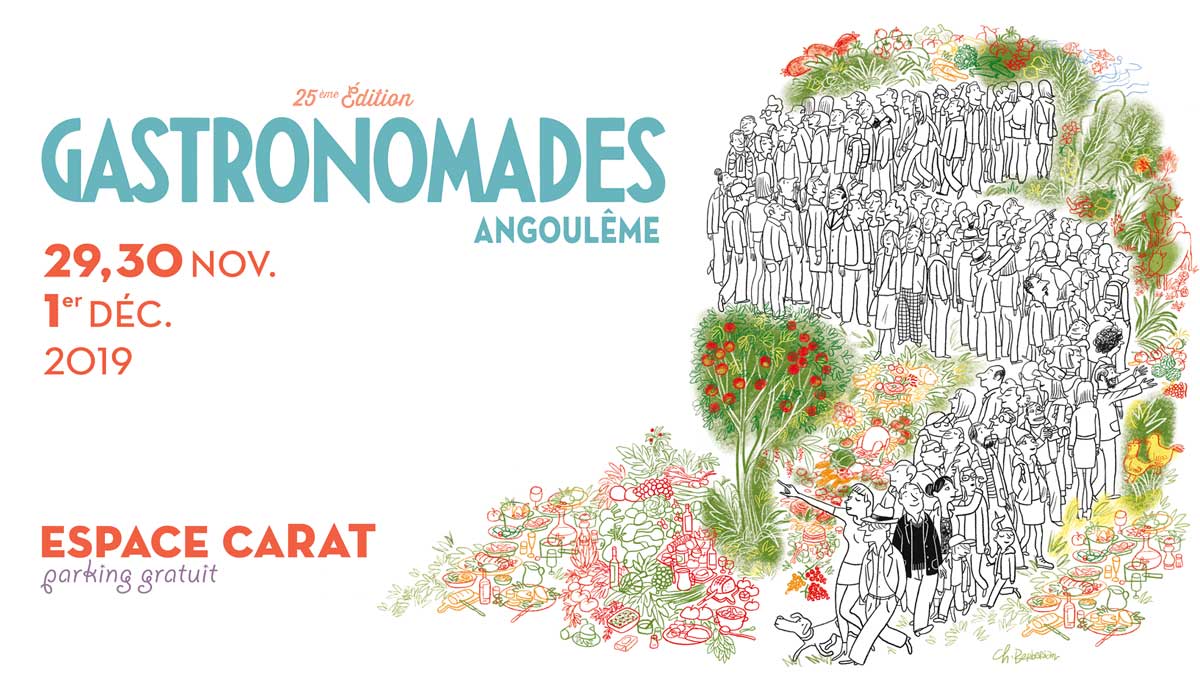 The Grand Angoulême urban community (Charente) organizes the Gastronomades every year, a festive event consisting of inviting a chef to cook several thousand meals highlighting the products of the region. Crédits : © GrandAngoulême.

A lower consumption of proteins of animal origin and ultra-processed products brings significant benefits in terms of public health.

The freeing up of land previously intended for animal feed makes it possible to develop extensive practices without restricting the final availability of food (see resilience path no. 7): permanent meadows, groves, pre-orchards. This development would also make it possible to considerably reduce greenhouse gas emissions linked to food.

Finally, the end of factory farming would put an end to the generalized animal suffering of which it is today the cause. Herders are also often victims of this system, and are among the most precarious farmers. Their reorientation towards quality channels is therefore desirable from all points of view.

The nutritional argument that a diet less rich in animal products poses health problems is also often encountered. However, many studies show that by keeping a balanced diet, reducing the proportion of animal products is on the contrary largely beneficial for health.

Today, schools engaged in this transition may face resistance, especially from parents of students. Even in the minority, these protests must be listened to: it is necessary to strengthen the educational effort, in particular by reassuring on health issues.

Transition of the sector

In reality, the main obstacle is probably not at the level of consumption choices but of the complex issues raised by breeders and manufacturers in the sector . We can assume that breeders are in favor of moving from industrial mass production to low-volume quality production, less intensive in inputs and capital, more socially valuable, more profitable for farmers, and also benefiting from payments. for agri-environmental measures. This development, however, is being carried out against the interests of the meat and dairy industries. We can therefore expect strong opposition strategies given the considerable resources available to these companies or other organizations representing the interests of the sector, such as the majority agricultural unions. Schools and catering could thus be targeted, as well as those elected to initiate these changes. Note, however, that the industry itself seems to be aware of changing consumer behavior and is starting to adapt its communication strategy accordingly. 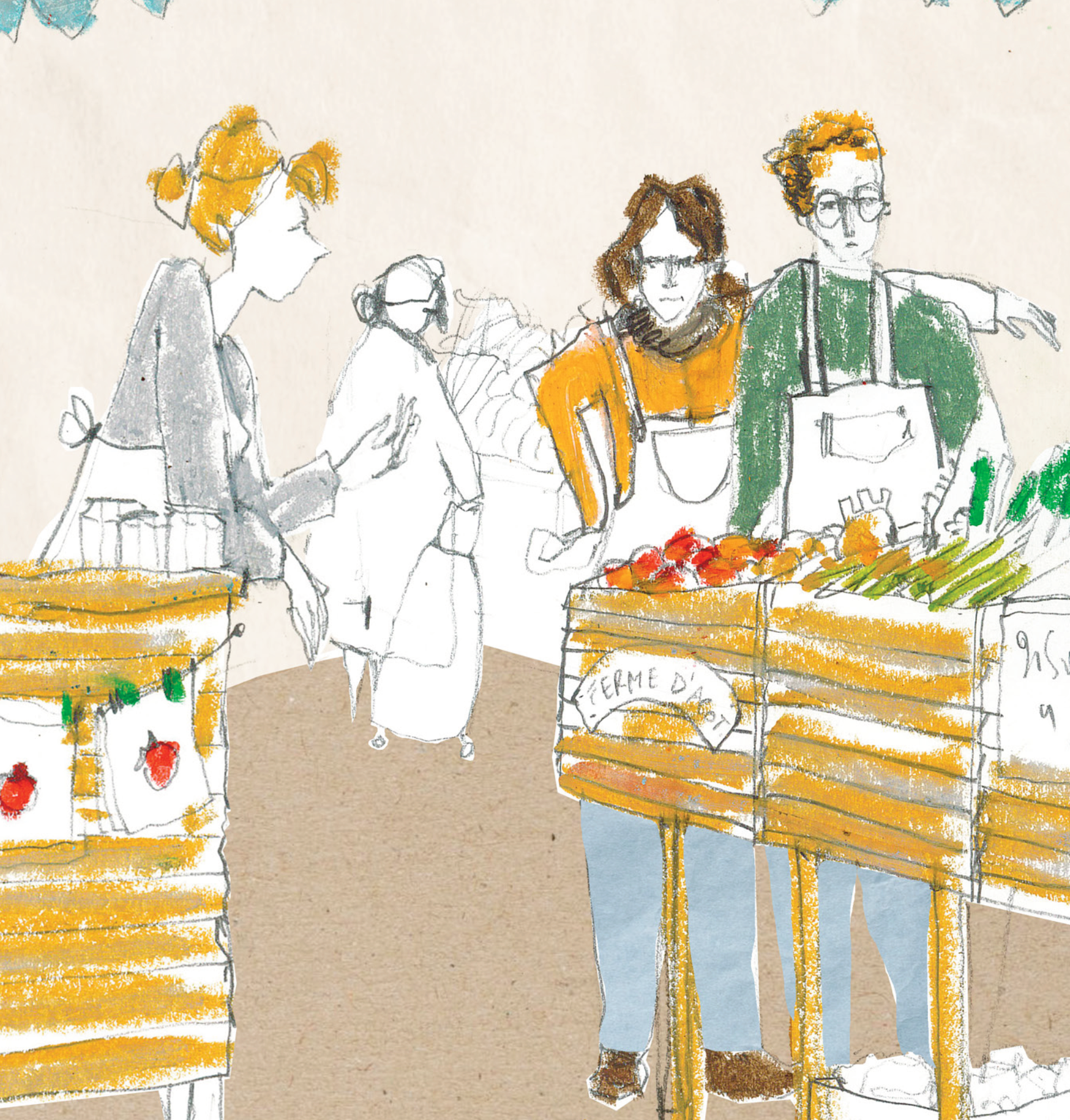 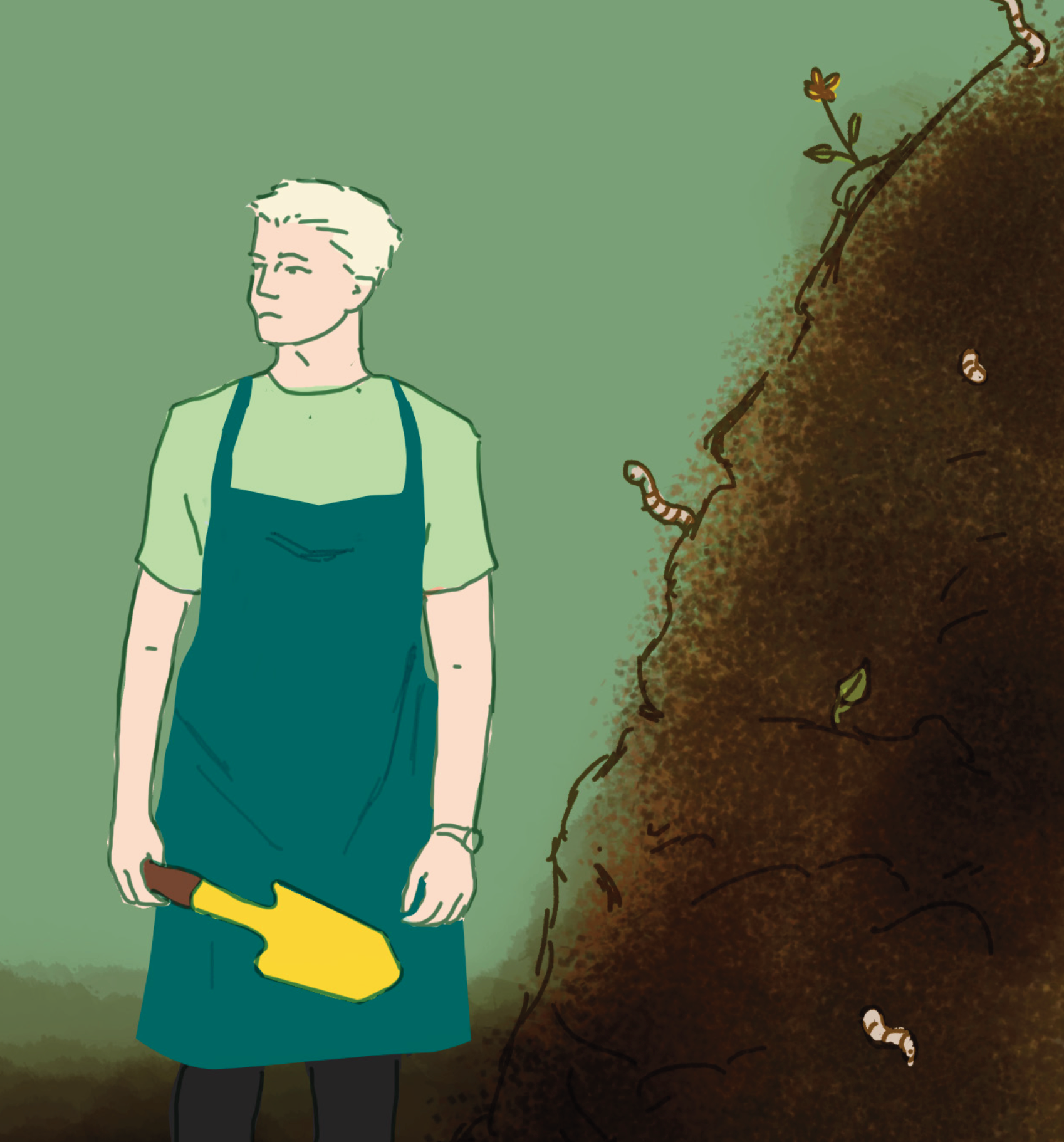 Next Section
Pathway to resilience n ° 11: Massively recycle nutrients
Sign up for free