Water is a critical limiting factor for agricultural production. In a context of rapid climate change, tensions over access to resources will be exacerbated. The choice of crops and the use of economical agronomic practices can limit the severity of this threat.

A resource under pressure

In France, the temperate oceanic climate ensures well distributed rainfall throughout the year over most of the territory. Arable crops, which occupy about half of the agricultural area and provide the basis of our food, are mostly rainfed: they do not require irrigation. In 2010, 9% of agricultural land had access to an irrigation device, but only part of the equipment is actually used each year: 5% of agricultural areas were irrigated in 2016. Although quite little widespread in terms of surface area, the agricultural use of water is however very intensive, so that it represents half of our water consumption in France, and 80% during the summer months. Its impact is all the more important since these withdrawals mainly take place between April and September, that is to say when the level of the watercourses is lowest (low-water period), and that they intensify further in times of drought.

Irrigation needs vary greatly from region to region. This is mainly explained by the differences in climate and by the widely varying needs of crops. In particular, the significant development of the production of maize for animal feed in the second half of the 20th century greatly increased summer water consumption in some regions. For only 10% of cultivated areas, corn growing represents half of irrigated areas (Figure 20). 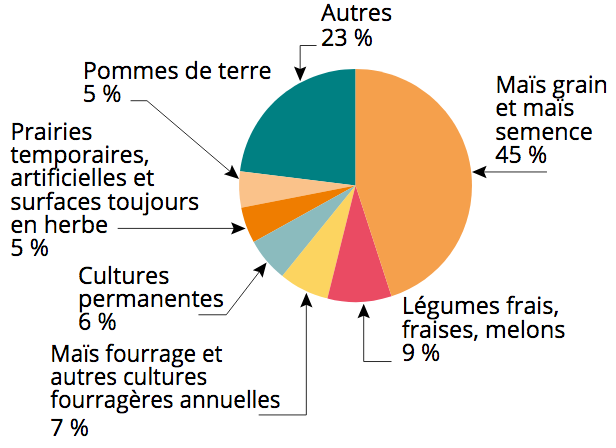 Figure 20 : Breakdown of irrigated areas by crop type in 2016. Grain, seed and fodder corn accounts for half of irrigated areas. The "Others" category covers in particular arboriculture. Source : Agreste (2019).

Grain corn and fodder represent more than half of irrigated areas, with use centered on the low-flow period of rivers. These crops, mostly intended for animal feed and industry, consume a lot of water in terms of their contribution to human food. Crédits : Daniel Jolivet, CC BY, Wikimedia Commons. 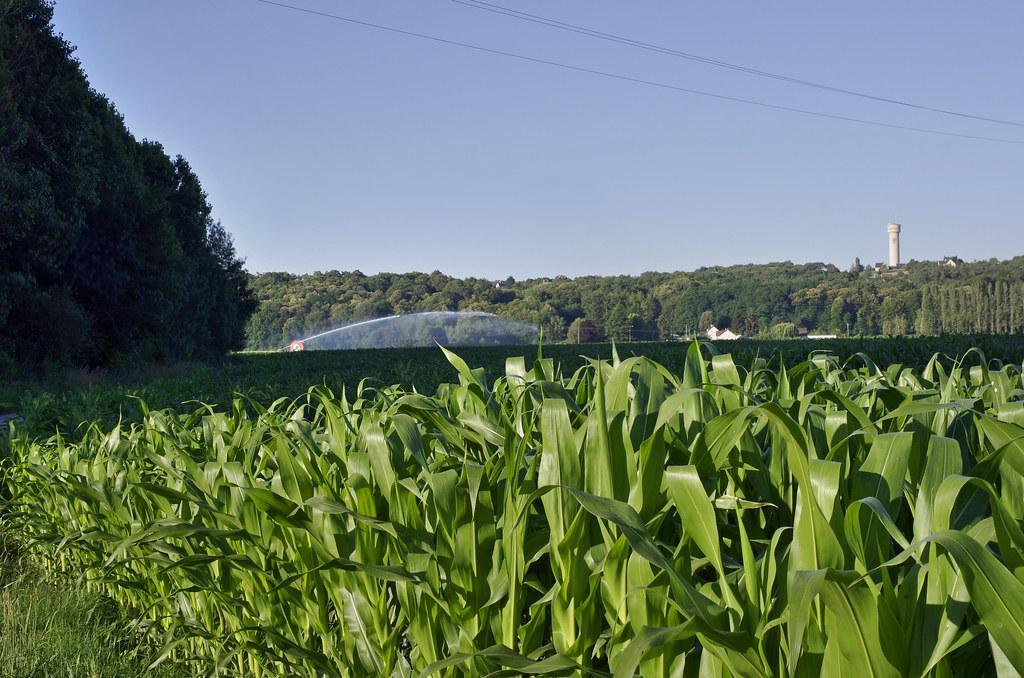 The source of the water, too, varies greatly from one territory to another. The seafront, the Paris basin and the east of France concentrate their use on groundwater, while irrigation relies primarily on surface water (lakes, rivers, hill reservoirs) in the southern departments ( Figure 21 ). It is the latter use that is the most problematic in the summer. 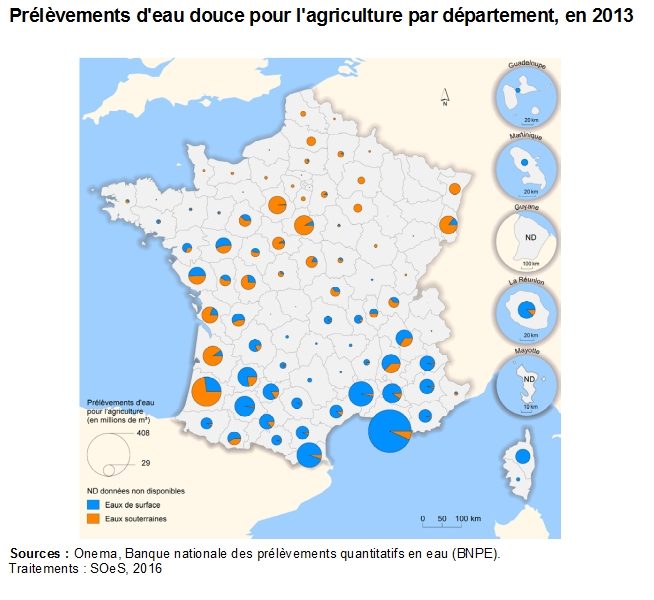 Figure 21 : Freshwater abstraction for agriculture by resource and by department in 2015. On the Atlantic coast, the volumes withdrawn are significant, while the rainfall is well distributed. Source : Commissariat Général au Développement Durable (2019).

In addition, water requirements vary greatly from year to year. For example, in a very dry year such as 2003, water consumption for irrigation more than doubled in Aquitaine. Non-irrigated crops, for their part, suffer directly from agricultural droughts: in 2003, the yield of most major crops fell by 20 to 30% . These drops in yield are absorbed by an adjustment in our trade balance, which is now in surplus at the French level. Some regions, however, find themselves forced to import products that they normally grow, such as fodder on farmland. If several European countries were simultaneously confronted with the same situation - an increasingly probable risk - significant tensions are to be feared on the markets.

But the main threats of drought will only become reality in the decades to come, even if we succeed in sharply reducing our greenhouse gas emissions today. The inertia of the climate system makes adaptation measures essential .

The information report by Senators Dantec and Roux on climate change underlines that “in the absence of strong adaptation measures to the water policy, all uses of water (preservation of aquatic environments, human consumption , tourism, agriculture) would be strongly affected and would be put in competition, with a risk of sacrificing the interests of certain users ”.

Most regions will suffer by the middle of the century from severely degraded soil moisture. In particular, in spring and summer (main seasons of plant growth), the average soil moisture level will correspond in 2050 to the “very dry” or “extremely dry” level of today in the majority of regions. regions (see Climate Change) . Very productive territories such as Beauce, Champagne or Picardy will experience exceptional and unprecedented episodes of drought. It is difficult to predict how much of the current production can be maintained without a profound transformation of cropping systems.

Water is one of the main limiting factors for crops. Faced with increasingly frequent and severe droughts, the yields of major crops and the availability of fodder will gradually deteriorate . Serious agricultural crises linked to extreme drought episodes are also to be expected.

In the absence of a sufficiently ambitious preventive policy, agricultural consumption will increasingly compete with priority domestic uses, including drinking water. The palliative treatment of these crises will make it necessary to turn regularly to road transport to meet this vital need. 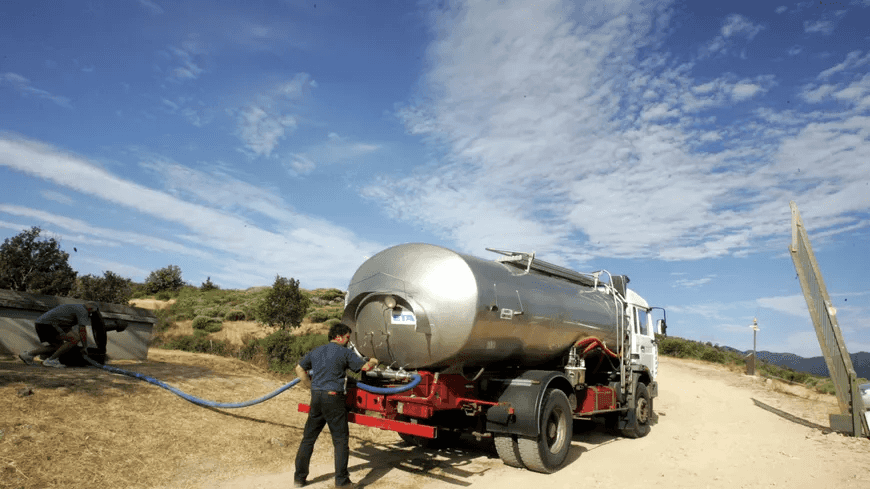 At the end of August 2019, 94 of the 96 departments of metropolitan France were affected by orders restricting the use of water. Several towns, such as Bort-les-Orgues (Corrèze) see their water towers supplied by tankers. Their limited capacity with regard to domestic water consumption requires incessant rotations, and induces total occasional dependence on road transport for drinking water. Crédits : © Maxppp - Fabrice Anterion.

The Garonne 2050 forward-looking report concludes that "faced with the scale of future problems, only major disruptions in production and consumption patterns that drastically reduce demand could meet the challenge". Reducing agricultural water needs is indeed the top priority . This starts with an increase in the share of drought-tolerant crops in rotations, and a sharp decrease in major crops dependent on irrigation, such as maize . The use and selection of varieties adapted to the lack of water is also to be encouraged (see path to resilience n ° 4).

Changing agricultural practices can also reduce irrigation needs by promoting water infiltration and retention in soils . This is one of the objectives of agroecology and associated practices: permanent soil cover, obstacles to runoff (hedges, grass strips, embankments), increase in the soil's organic matter content (see resilience path no. 7). For the residual needs of market gardening and fruit crops, economical irrigation practices (drip irrigation) are to be favored.

More generally, the entire watershed must be the subject of a common water resource management policy . Non-agricultural uses must also be more sober and more efficient. Groundwater recharge systems from surface water can be optimized in order to efficiently store - by limiting evaporative losses - part of the rainfall and wastewater after treatment. This requires in particular the development and protection of wetlands, hedges, and permanent grasslands, which promote water infiltration and reduce the risk of flooding.

Without calling into question irrigation per se, the current use of water resources, as well as certain adaptation measures envisaged, appear inappropriate in a context of progressive drying up .

In particular, increasing surface water storage capacity, thanks to the construction of "basins" or hill reservoirs, is most of the time counterproductive . A "vicious cycle of demand" is taking place: (1) the new storage capacities encourage an increase in irrigated areas; (2) the territory is all the more vulnerable in the event of a deficit: a prolonged drought causes increased economic damage; (3) the pressure to build new storage capacities increases. These structures create the illusion of a stable resource, and delay the transformations necessary to reduce demand , which alone are able to respond to the accelerated degradation of the hydrological regime. Given the increase in frequency and duration of periods of drought, this race is lost in advance .

LEVER 1 : Make an inventory of the water resource and its evolution then set objectives to reduce the dependence of the territory on irrigation

Analyze, with the water agencies, the tensions already existing on the resource and the expected consequences of climate change. The study should not be limited to the nearby territory but also consider the impacts of users further afield.

In partnership with the irrigation unions, draw up a diagnosis of the farms most dependent on irrigation, monitor the evolution of use by sector, and set ambitious targets for reducing the use of water. water staggered over time . Depending on the local context, it is possible to rely on the Water Development and Management Schemes (SAGE) and their prescriptive component or their recommendations.

LEVER 2 : Support financially and technically the development of farms towards crops less dependent on irrigation

Promoting water-saving farm models from the start. In particular, reduce the place of corn in crop rotation, in favor of other crops directly recoverable for human consumption and more resistant to dry summer conditions (wheat, sunflower, millet, sorghum, etc.). 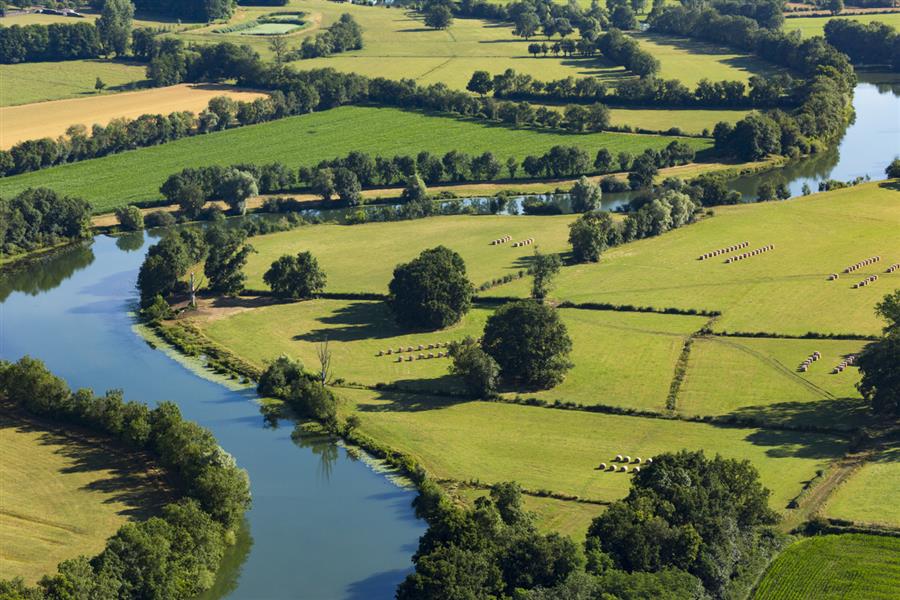 The municipality of Lons-le-Saunier (Jura) operates its drinking water network directly, 70% supplied by pumping in the alluvial plain of the Seille (photo). In the 1980s, the municipality found itself faced with high levels of nitrates and pesticides. She decides to act by entering into contracts with the farmers so that they can modify their practices: abandon the cultivation of corn, maintain the meadows, etc. In the 2000s, the city developed support for conversion to organic farming. Crédits : PRA, CC-BY, Wikimedia Commons

LEVER 3 : Train farmers in the economical management of the resource

Set up a training cycle with professional agricultural organizations. Target the most consuming farms to train their farmers in practices to improve water retention in the soil, and in economical irrigation techniques. 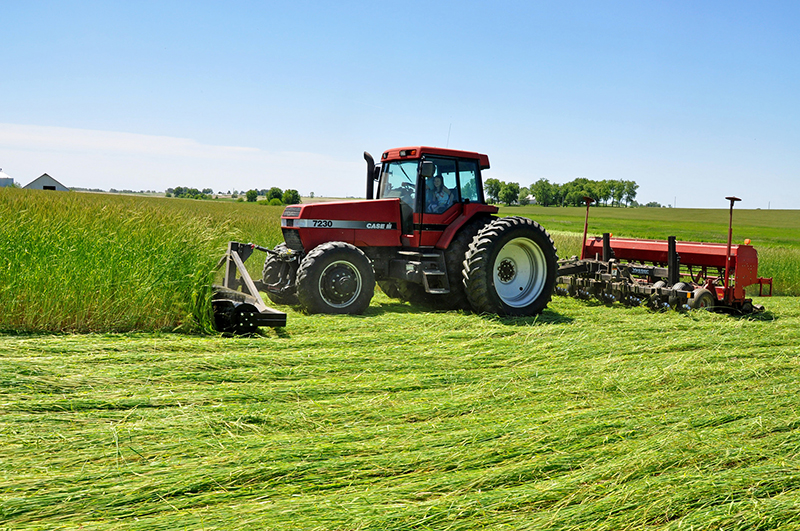 Direct sowing under cover. The integration of plant cover in the rotations is one of the practices reducing the need for irrigation. The permanent maintenance of a plant cover favors the infiltration of rainwater, the organic matter brought to the soil by the cover crop increases its water retention capacity (useful reserve), and the greater biological activity of the soils allows a better water supply to plants thanks to symbiosis with certain fungi. Direct sowing under cover is still not very widespread in France, while it is widely developed in tropical countries and increasingly adopted in the United States and Brazil. Crédits : © Jason Johnson, USDA’s Natural Resources Conservation Service

After treatment, the water from the purification stations is discharged into aquatic environments. This resource can instead be used directly for irrigating nearby land. This practice also makes it possible to fertilize crops because nutrients are still present in the treated water (see pathway for resilience n ° 11). 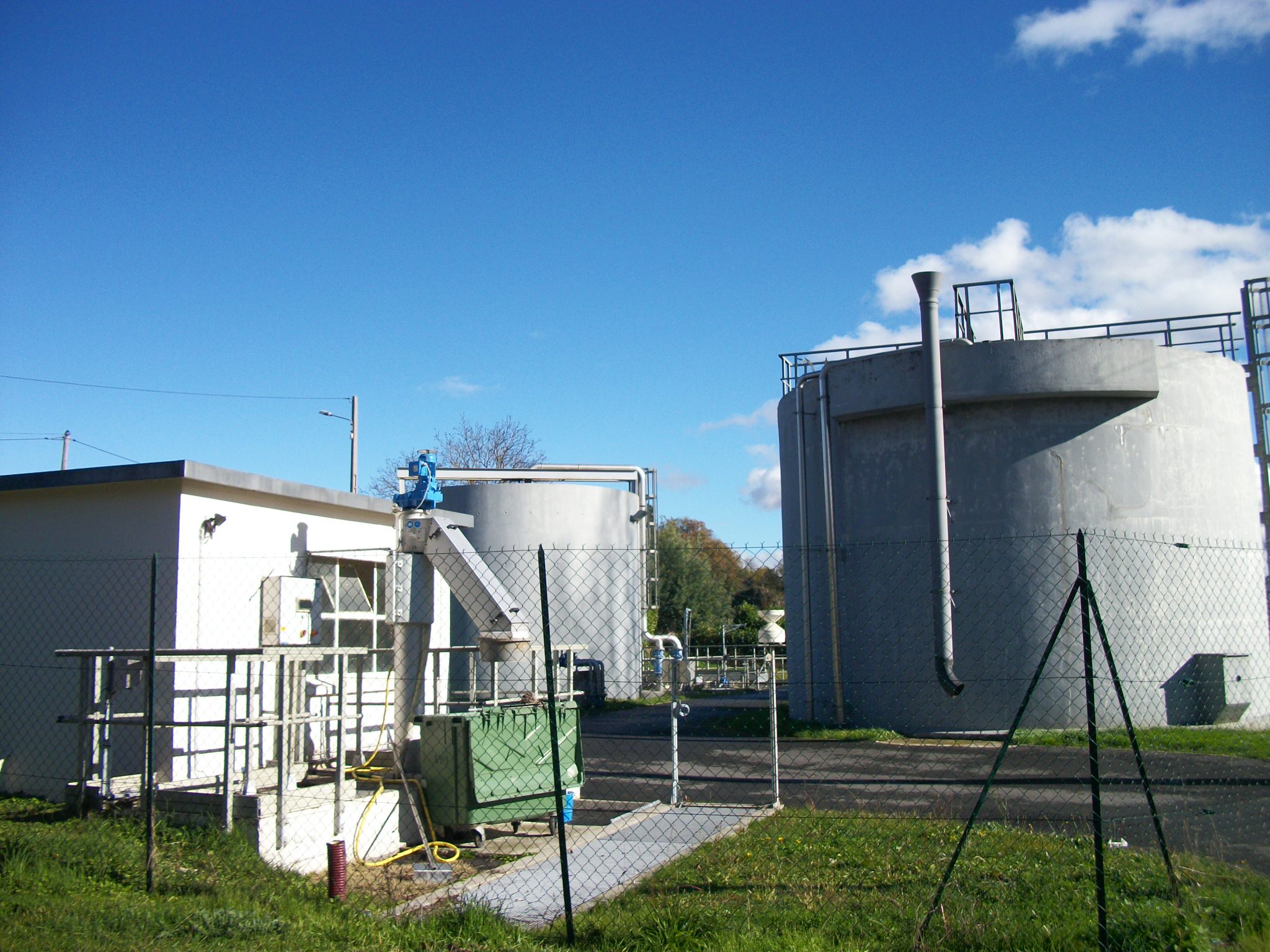 On the island of Noirmoutier (Vendée), around a third of the wastewater treated by the two wastewater treatment plants on the island is used for agricultural irrigation instead of being discharged into the sea. This recycling of the resource brings water and nutrients to 380 hectares of potatoes. Crédits : Patrice Bon, CC BY-SA, Wikimedia Commons.

The integrated management of water resources is accompanied by a marked improvement in its quality . Agriculture can be a major source of pollution of aquatic resources, or on the contrary participate in its preservation. Nationally, water pollution by pesticides and nitrates costs at least 1.7 billion euros per year to provide drinking water, and if it was necessary to eliminate agricultural pollutants present in the water , it would cost at least 54 billion euros per year. The cost of the cure would reach about a hundred times that of the preventive .

The Garonne 2050 prospective study underlines that in the absence of measures, the decrease in the rate of renewal of surface water will result in less dilution of pollutants and an increase in the average temperature on the ground. In addition to its massive impact on biodiversity, the concentration of pollution and pathogens would then weigh heavily on the production of drinking water and would cause a significant additional cost for its purification. Drastically reducing the abstraction of surface water for agricultural purposes is therefore very useful in preventing the emergence of these problems of pollution and soil warming .

Obstacles to limiting water needs can be economic (less profitable crops for farmers), psychological (opposition, brakes to change), technical (practices and equipment to be acquired) or political (conflicts of interest between actors). Consultation between users and management organizations is essential, as is technical and financial support for farmers. 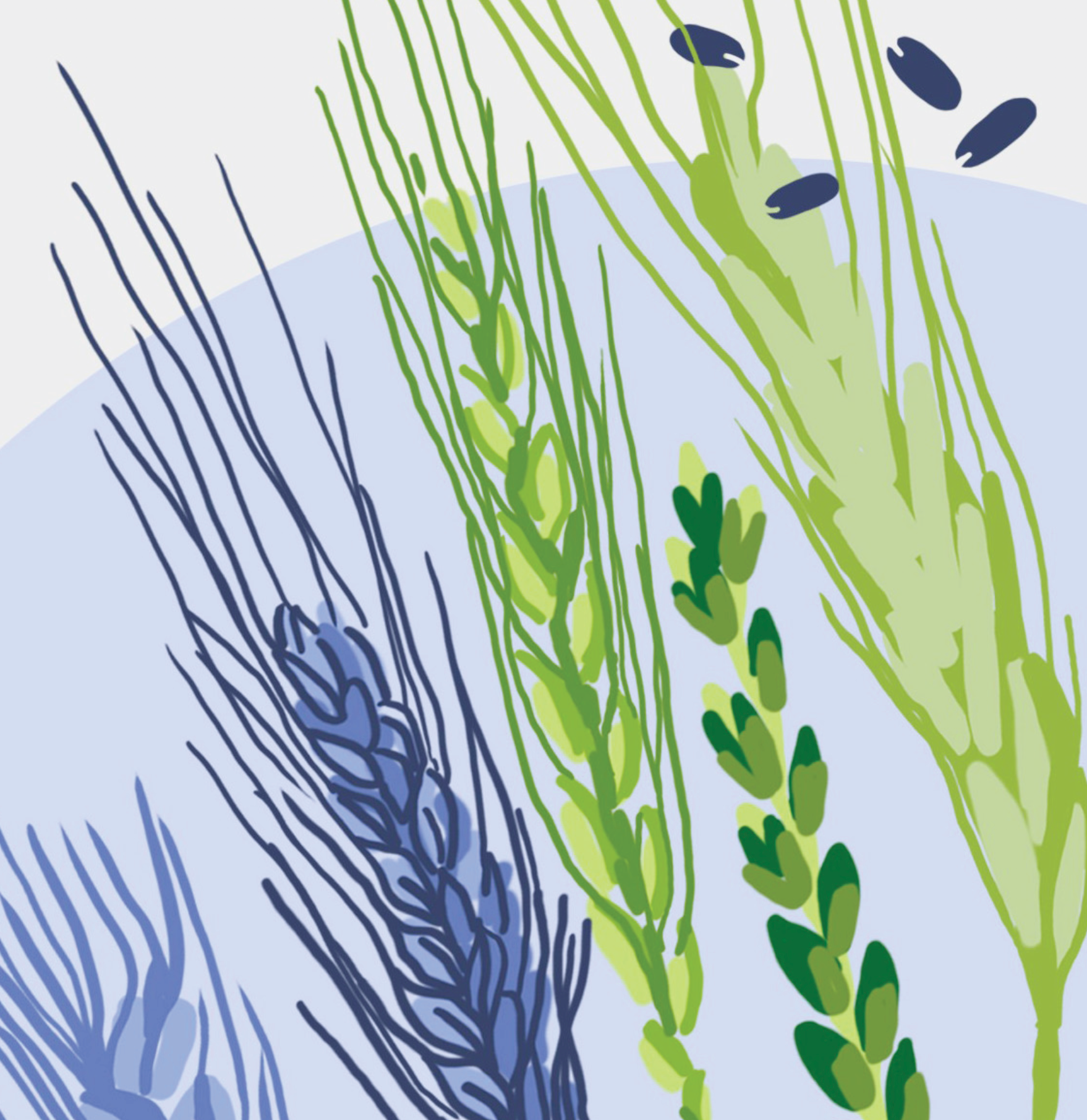 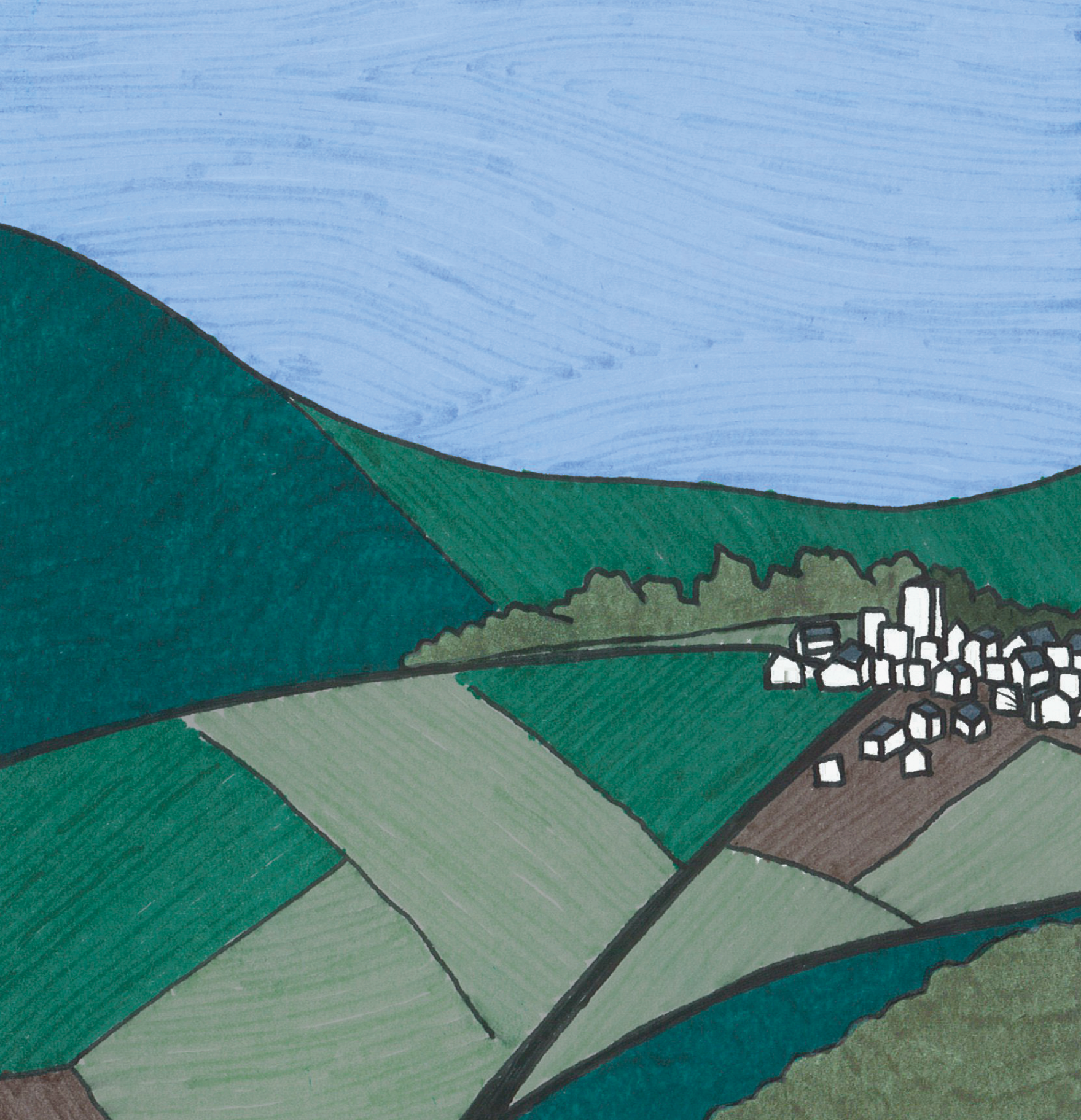 Next Section
Pathway to resilience n ° 6: Evolving towards nourishing agriculture
Sign up for free