The levers for action proposed in this report aim above all to anticipate and reduce the risks linked to basic degradation, which in turn reduces the vulnerability of the food system to crisis situations . These actions and transformations seek to be part of a "no regrets strategy", that is to say they are beneficial regardless of the type and timing of the crises experienced.

Faced with the diversity of threats to be taken into account, it seems relevant to mobilize the concept of resilience . Used in several disciplinary fields since the 1960s (ecology, mechanics, sociology, psychology, etc.), the term is enjoying growing success in the development of risk management strategies at all scales: intergovernmental, national, territorial. While finding a formal and consensual definition is not easy, resilience is generally understood to mean the capacity of a system to maintain or regain its essential functions when subjected to disruption.

Food system resilience can be defined as the capacity of a food system and its constituent elements to guarantee food security over time, despite various and unforeseen disturbances (Figure 11) . The food security of a territory is ensured when “all its inhabitants have at all times the physical, social and economic possibility of obtaining sufficient, healthy and nutritious food allowing them to meet their food needs and preferences to lead a healthy life and active ”. 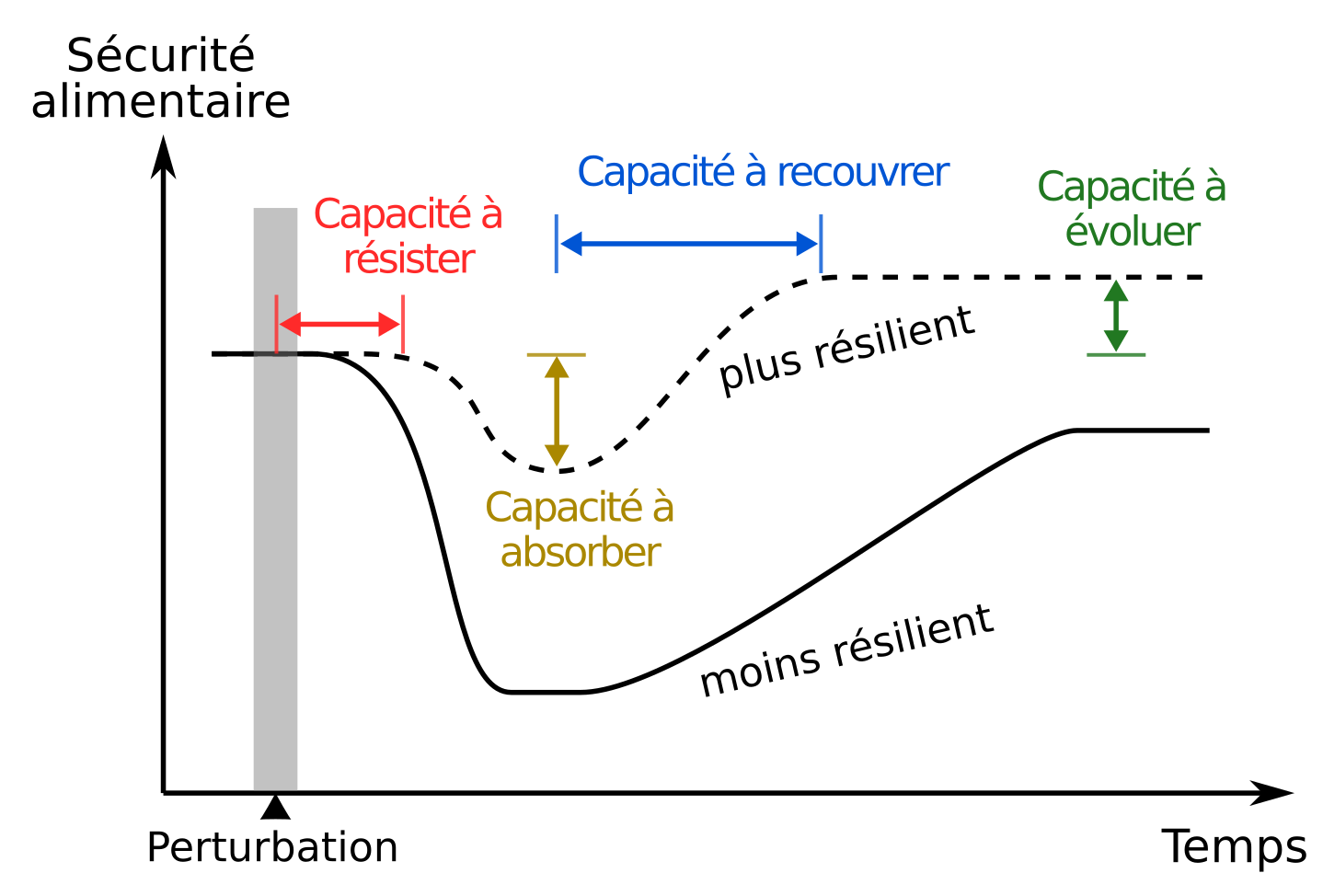 The changes that greater resilience entails can give rise to conflicting interpretations - between radical transformation of the system and strengthening of the status quo. It is therefore important to specify the conceptual framework of food resilience retained for this report.

1. The current food system is inherently unresilient : undiversified, dependent on depleting resources, built for short-term maximization of production. It also itself contributes to the aggravation of the threats described above. Continuing historical trends would only increase its vulnerability. The goal of resilience therefore does not imply any strengthening of the structures of the food system as it is; on the contrary, it requires its profound transformation .

2. Resilience is a dynamic parameter . The question is not whether or not a food system is resilient, but how resilient it is to various types of disruption. This level changes according to the disturbances encountered and the responses provided.

3. Resilience is not a sufficient criterion to make a food system desirable . It is easy to imagine systems that are both highly resilient and socially failing, based on various forms of inequality and exploitation. The search for better resilience does not replace the imperative of "sustainability", or an ethical objective of justice and equity.

The criteria of resilience

Several theoretical and empirical works have made it possible to propose some criteria for the resilience of food systems. We can for example quote:
- diversity at all levels , be it that of productions, varieties, cultivation practices, wild life, actors and their interactions ... Faced with multiple and unpredictable disturbances, a greater diversity makes the system more robust by increasing the chances that certain links will resist better. It also allows for greater adaptability, by selecting the most effective structures and practices as the context evolves;
- the autonomy of the territory , that is to say the possibility for farms to have their production factors locally, to market and process their products on the territory, and for the inhabitants of meet their basic needs locally. This is what is meant by "re-territorialization" or "subsidiarity" of the food system;
- the modularity and connectivity of the food system , in other words its functioning in units (gardens, farms, intercommunalities, regions, etc.) which are relatively autonomous but can support each other. In the event of a disturbance, it is more difficult to propagate and the affected unit can quickly be helped by neighboring units;
- redundancy , or the fact that the same function is provided by several independent elements of the system;
- the cohesion of actors , which facilitates solidarity, collective involvement, decision-making, flexibility of interactions, the development of alternatives and the evolution of the system.

A systems approach to problems

The threats to the food system are multifaceted, and affect various links at different spatial and temporal scales. Each has the potential to affect the entire system, and their combination can have even more serious repercussions. To ignore a threat - for example by focusing the work effort on climate change, while neglecting the energy issue - it is to risk rendering obsolete all the efforts made. The same is true of working only on one link in the food system (production, distribution, etc.), when all are essential for the proper functioning of the entire system. The systems approach developed here is distinguished from the "silo" treatment of issues, that is to say independently of one another, as hermetic entities. It provides a general framework for analyzing the different components of the food system, the diversity of threats they face, and the interactions between these elements. This approach is suitable for strengthening the coherence of public policies in terms of food resilience.

Today in France we are witnessing a revival of political interest in the food issue. Projects aiming to change the dominant model, or to emancipate itself from it, are emerging at the national level (States general of food and EGalim law), territorial (territorial food projects) and local (collective catering, short circuits), with in most cases a strong citizen mobilization (CIVAM, ADEAR, AMAP, Terre de Liens, etc.). Numerous examples in France bear witness to the voluntarism of certain municipalities in terms of ecological transition, and the concrete impacts of their policies. However, elected officials do not always perceive the driving role that public authorities can play in the transition . The state of the food system in this report reveals the general inadequacy of policies implemented to prepare for the threats identified. At the heart of local public policies until the industrial revolution, food supply was gradually delegated informally to private actors: farmers, cooperatives, processing and distribution companies ... Food security for the French population today falls outside the scope of public responsibility . The existing legal systems have sectoral approaches (land, commercial law, health security), or are limited to the management of crisis situations. At the territorial level, senators observe that: "if the so-called ORSEC emergency plans have proved their efficiency over short periods of a few days, [...] they could not meet the needs of the population over a longer time frame and larger territories ”.

The power of local authorities

French local authorities ( Figure 12 ), in particular municipalities and public establishments for inter-municipal cooperation (EPCI), today benefit from several competences enabling them to act directly and indirectly on each link in the system. local food:
- urban planning and development;
- economic and agricultural development;
- collective catering;
- waste collection, management and prevention;
- management of the great water cycle and the environment
; - public distribution of drinking water;
- sanitation policy;
- municipal safeguard plan;
- finally, the general clause of competence (CGC) confers a capacity of initiative to the municipalities beyond the fields of competence which are strictly attributed to them by the law in force, on the basis of the territorial interest in the matter. 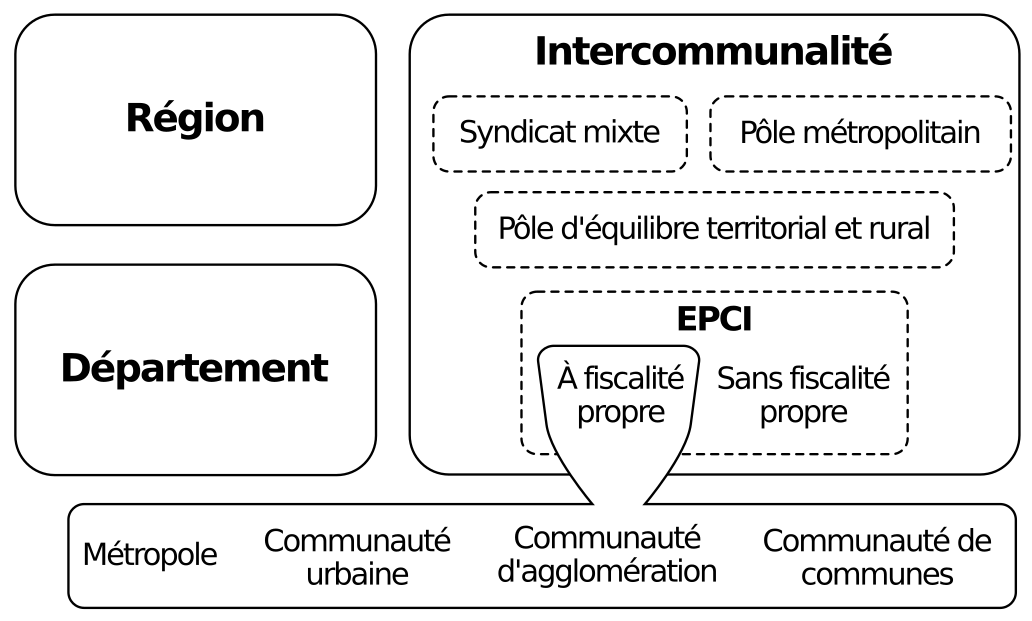 An inventory of regulatory tools and skills available to communities to act on each link in the food system is presented at the end of this report (see Building and financing a food resilience project ). 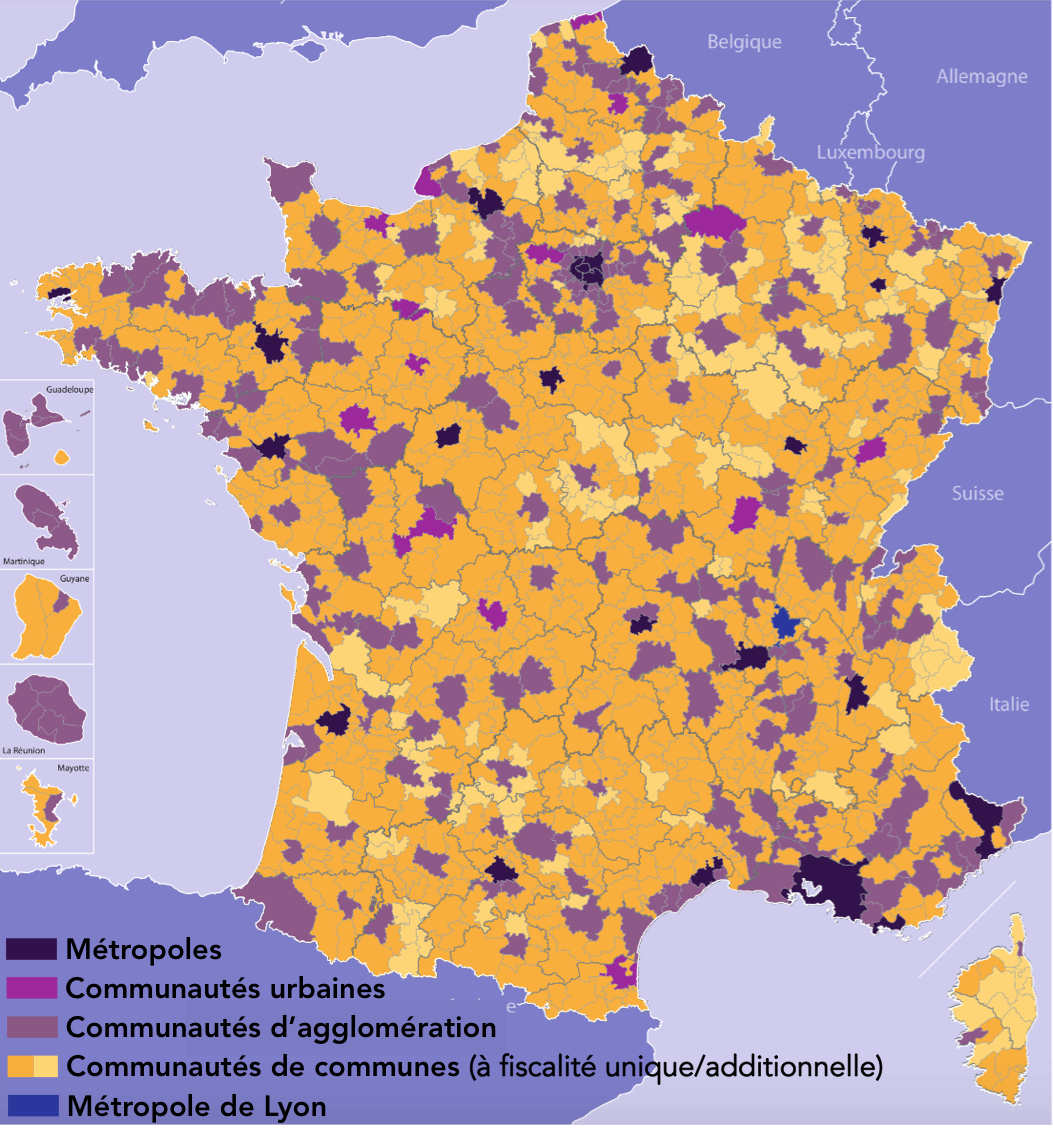 Map of French intercommunalities as of January 1, 2020 There are 22 metropolises (including that of Lyon, with special status), 14 urban communities, 222 urban communities and 997 communities of municipalities. Source: DGCL (2020) © IGN All rights reserved.