Depletion of energy and mining resources

The food system is heavily dependent on non-renewable resources, in particular fossil fuels. The prospect of a short-term decline in oil supplies completely calls into question the productive capacities of farms as well as the entire downstream organization of the food system.

Tillage, sowing, hoeing, harvesting, threshing, sorting, mowing, drying crops, transporting, milking ... Like any human activity, agricultural work requires a source of energy. Until the Green Revolution, it came almost exclusively from the muscles of peasants and their work animals, which themselves depended on agricultural products. But today, farms get most of their energy from petroleum, in the form of fuel for tractors and other self-propelled machinery (Figure 7) . Heating and machinery in crop and livestock buildings consume natural gas and electricity. 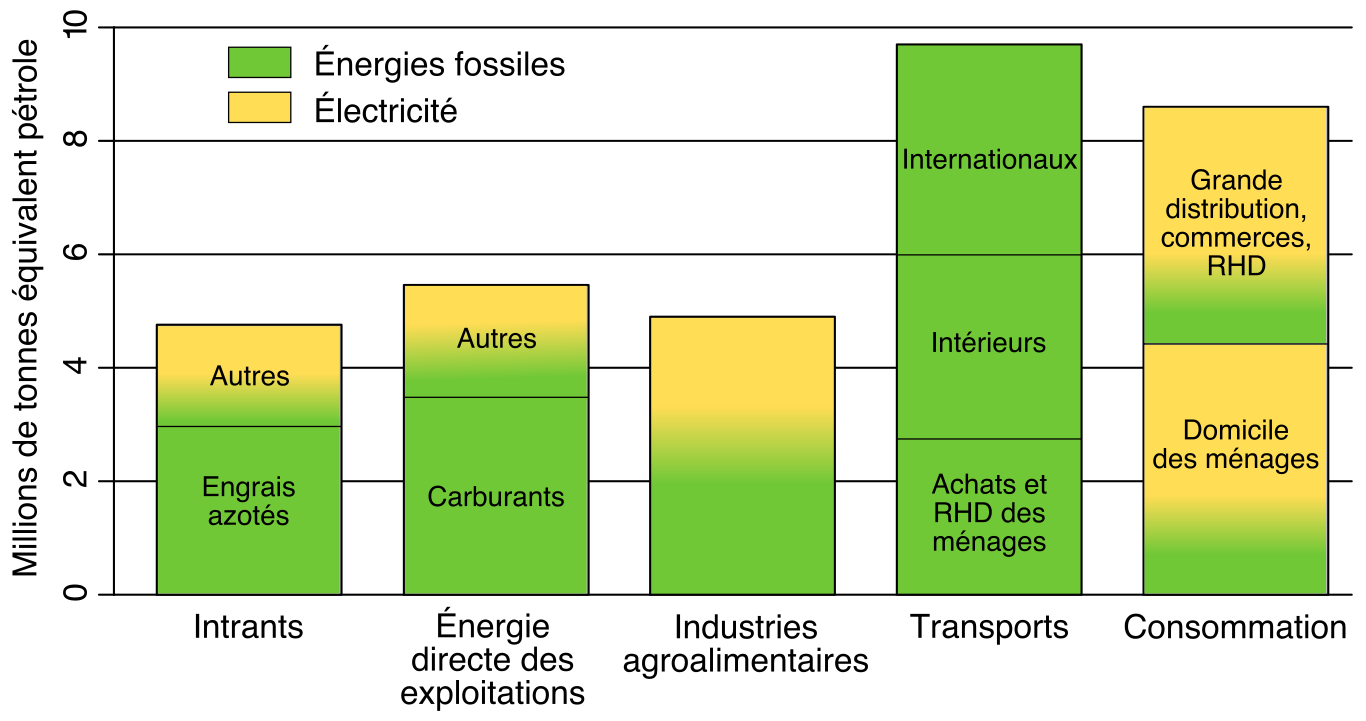 Added to this is a significant share of indirect energy, used in the manufacture of various agricultural inputs . In particular, the industrial synthesis of nitrogenous fertilizers by the Haber-Bosch process uses large amounts of natural gas. Phosphate and potassium fertilizers, also widely used, come from mines that require excavators, bulldozers and petrol trucks to operate. Agriculture has therefore gone in less than a century from a situation of energy autonomy to a very strong dependence on fossil fuels . 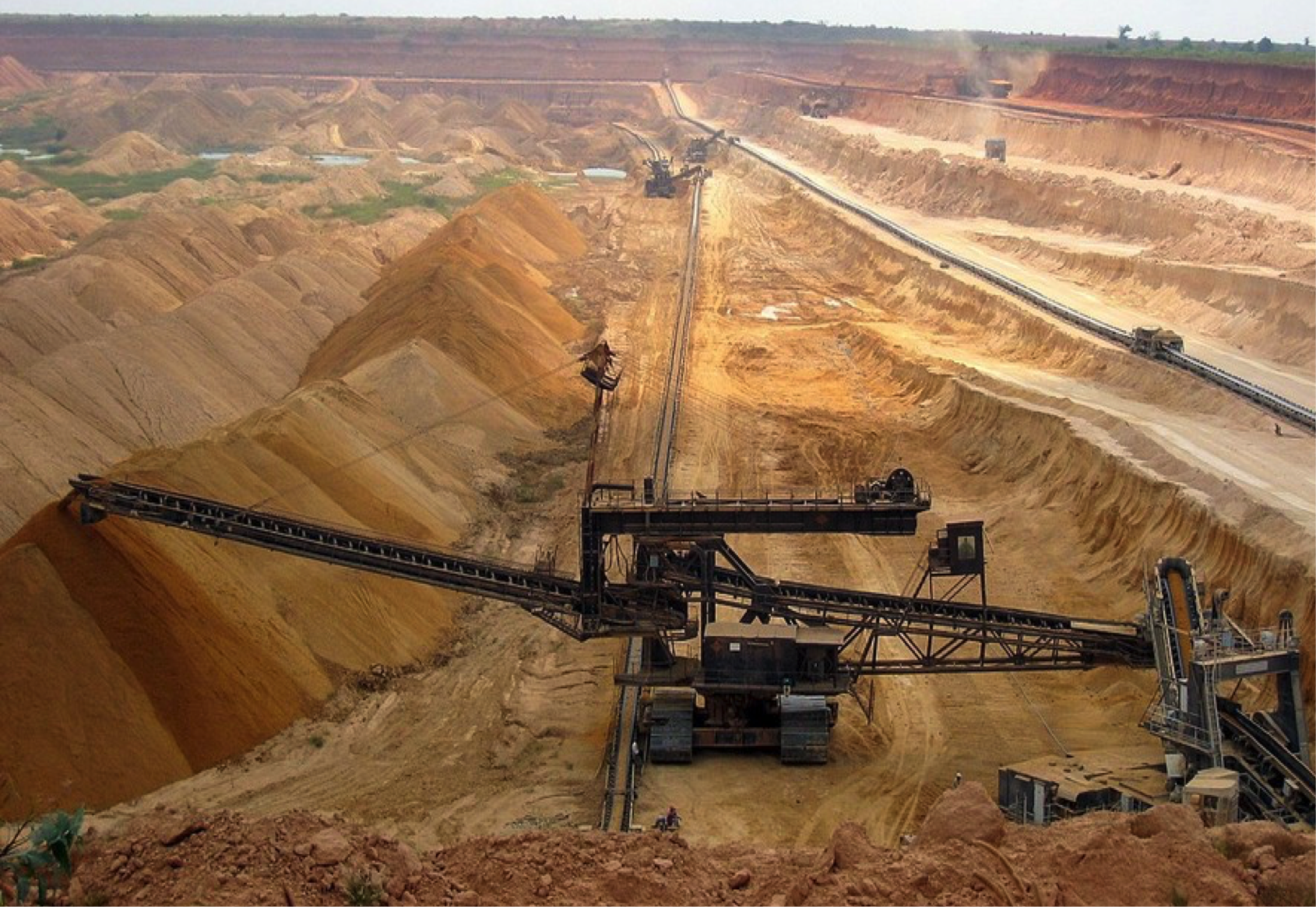 Beyond agricultural production, the modern food system is based on complex, energy-intensive processing and distribution chains, which require road transport between each stage (see ) . To illustrate, the example of a banal strawberry yogurt is edifying: put end to end, its manufacturing steps involve ten industries and more than 9,000 kilometers of road transport. Dependence on fossil fuels and in particular on oil therefore concerns the entire food system (Figure 7). 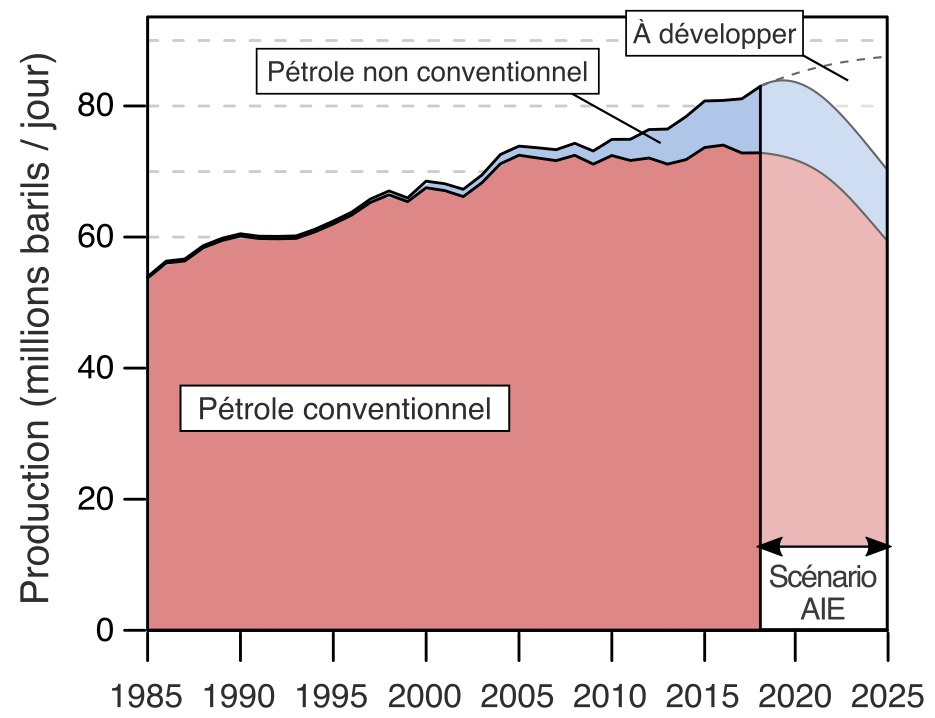 Figure 8: Evolution of crude oil production (excluding gas liquids) between 1985 and 2018 and scenario of the International Energy Agency (IEA) to meet an increase in demand of 1% per year until 2025. The projections include projects under development. The category "to be developed" corresponds to known deposits but for which there are no development projects yet. We note that the production of conventional oil has not increased since 2005: its decline is expected from the 2020 decade. Compensating for this decline to meet growing demand would require a sharp increase in the production of unconventional oils, a scenario considered unlikely by the IEA. Source : Les Greniers d’Abondance, from data by l’Energy Information Administration, by the Canadian Association of Petroleum Producers and the IEA (2018).

At the end of 2018, the International Energy Agency (IEA) warned public decision-makers of the risk of a contraction in the global oil supply (Figure 8). Discoveries of exploitable fields have never been lower, and conventional oil production peaked in 2008 . The boom in American shale oils since 2010 has succeeded in meeting the increase in demand, but their production would have to double from its 2018 level to avoid a shortage by 2025. Such a scenario is considered unrealistic by many experts and by the IEA itself. A constraint on the overall oil supply is therefore likely in the short term . Countries totally dependent on imports - such as France - would be particularly exposed. 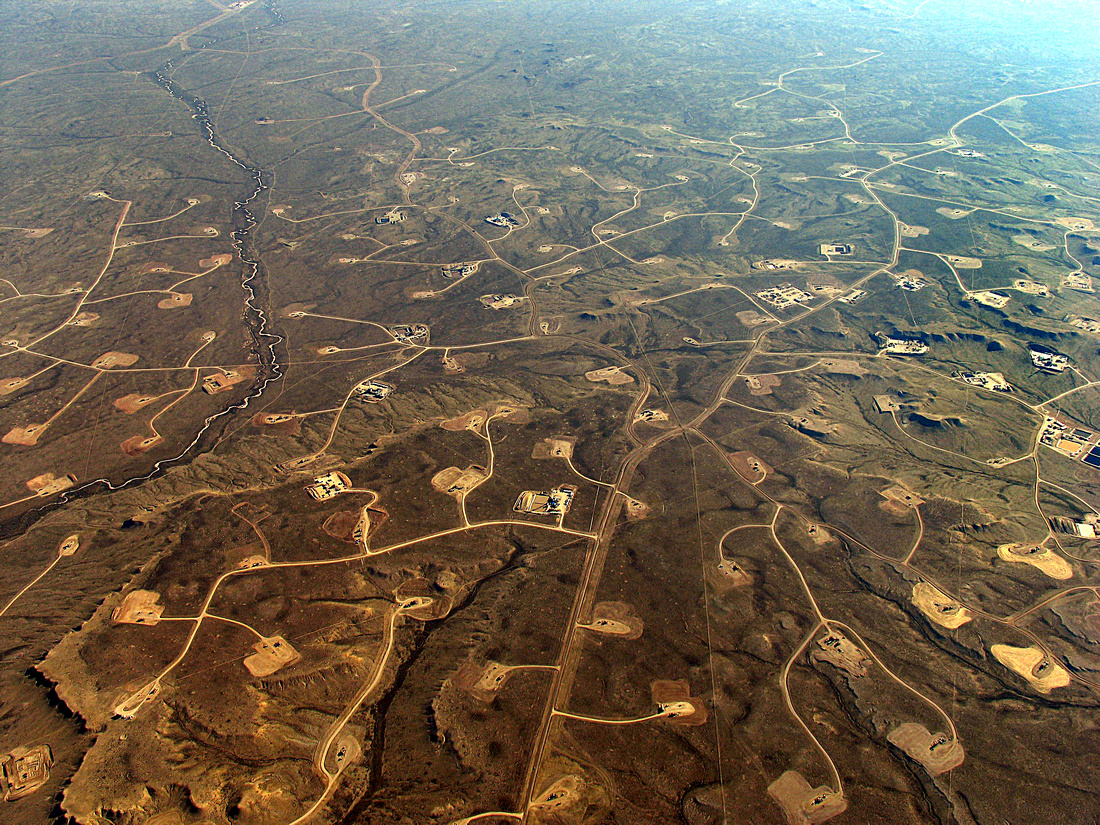 Oil and gas field in Wyoming, United States. With the significant growth of shale oil, the United States has once again become the world's largest producer of oil. Unconventional oils are unlikely to be enough to offset the decline in conventional oil: we would face a global supply contraction before 2025. Crédits : © EcoFlight.

These exhaustion issues do not only concern fossil fuels, but also non-renewable mineral resources based on non-nitrogenous mineral fertilizers (phosphorus, potassium, zinc, etc.). As the more concentrated deposits are mined, more energy is needed to obtain the same amount of ore. Their peak production therefore depends on both peak oil and the degradation of the quality of the deposits. For phosphorus, for example, a critical element for plant growth, the estimated reserves are still relatively large, but uncertainty remains as to our ability to exploit them in a world constrained by oil supply. Sulfur, another critical nutrient for crops, is a by-product of hydrocarbon refining. Its future availability is therefore also compromised by the announced decline of fossil fuels .

Fundamental degradation : higher prices and scarcity of inputs, rise in food prices Although the agricultural sector only represents less than 5% of national consumption of petroleum products, the most consuming farms could be economically weakened in the event of a rise in the price of a barrel - or even be unable to afford their production. . This risk would worsen as the crisis sets in over time, and a fortiori in the event of an energy drop suffered following global peak oil.

In general, dependence on oil or gas on other factors of production - in particular fertilizers - can lead to high price volatility and threaten the survival of the most fragile farms . During the surge in oil prices between 2006 and 2008, the price of fertilizers on the world market, for example, rose by 80%.

Road transport, which relies exclusively on oil, would also see its cost increase sharply. Accessibility to food would deteriorate for the most modest social classes.

Crisis situations : oil shock, geopolitical conflict, lack of supply and local shortages A sudden energy crisis would have major immediate impacts on the food system. In town and in the countryside, the supply of the population relies overwhelmingly on heavy goods vehicles, mass distribution, delivery vans and private cars . The system operates on a just-in-time basis and therefore has very little stock. A disruption of road transport can quickly compromise food security locally or more widely. The example of the protests against the increase in fuel taxes in the United Kingdom in 2000 is illuminating: less than a week after the start of blockades at some oil terminals and refineries, supermarkets in the country were rationing food and foresaw impending shortages . 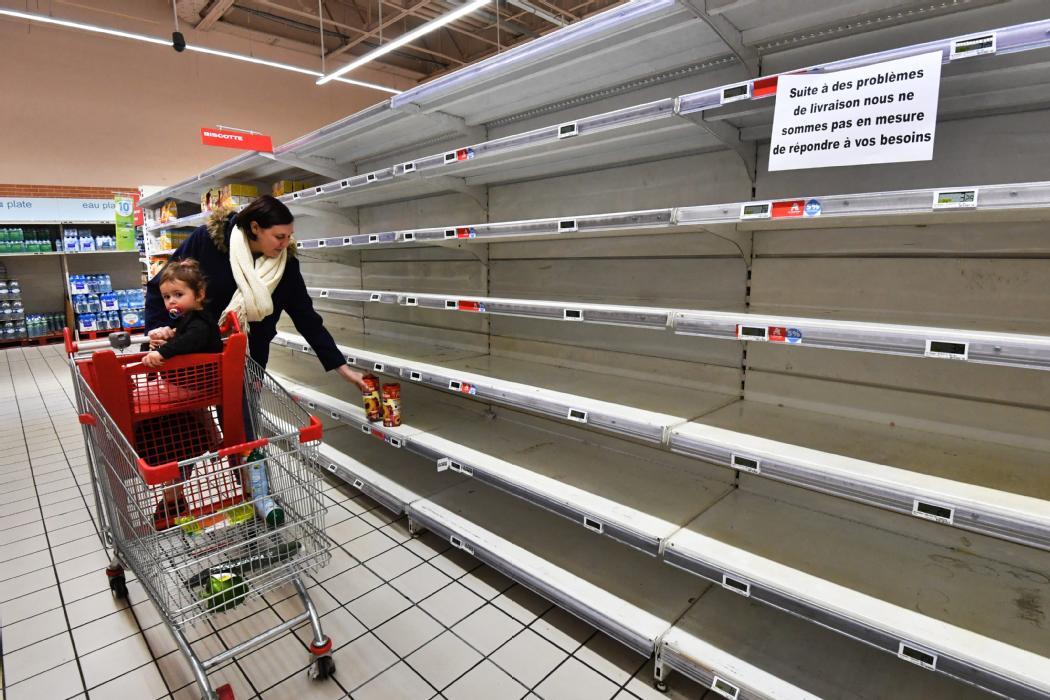 Empty shelves in a Clermont-Ferrand hypermarket in November 2018. In a few days, following the blocking of a logistics platform in the Nîmes region by groups of "Yellow Vests", certain food products ran out in many stores. The just-in-time operation of the food supply is very sensitive to disruption of road transport. Crédits : © Jean-Louis Gorce. 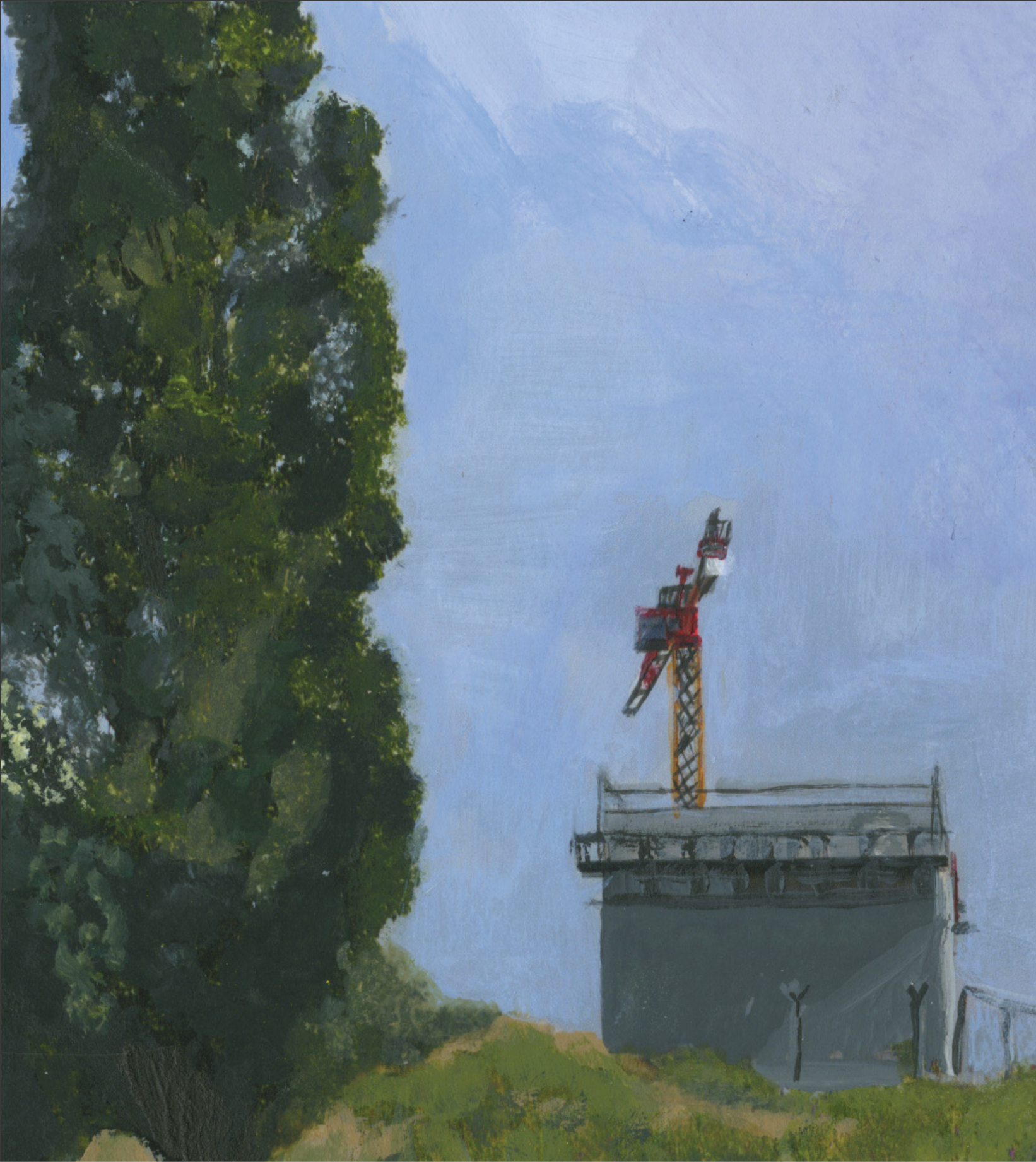 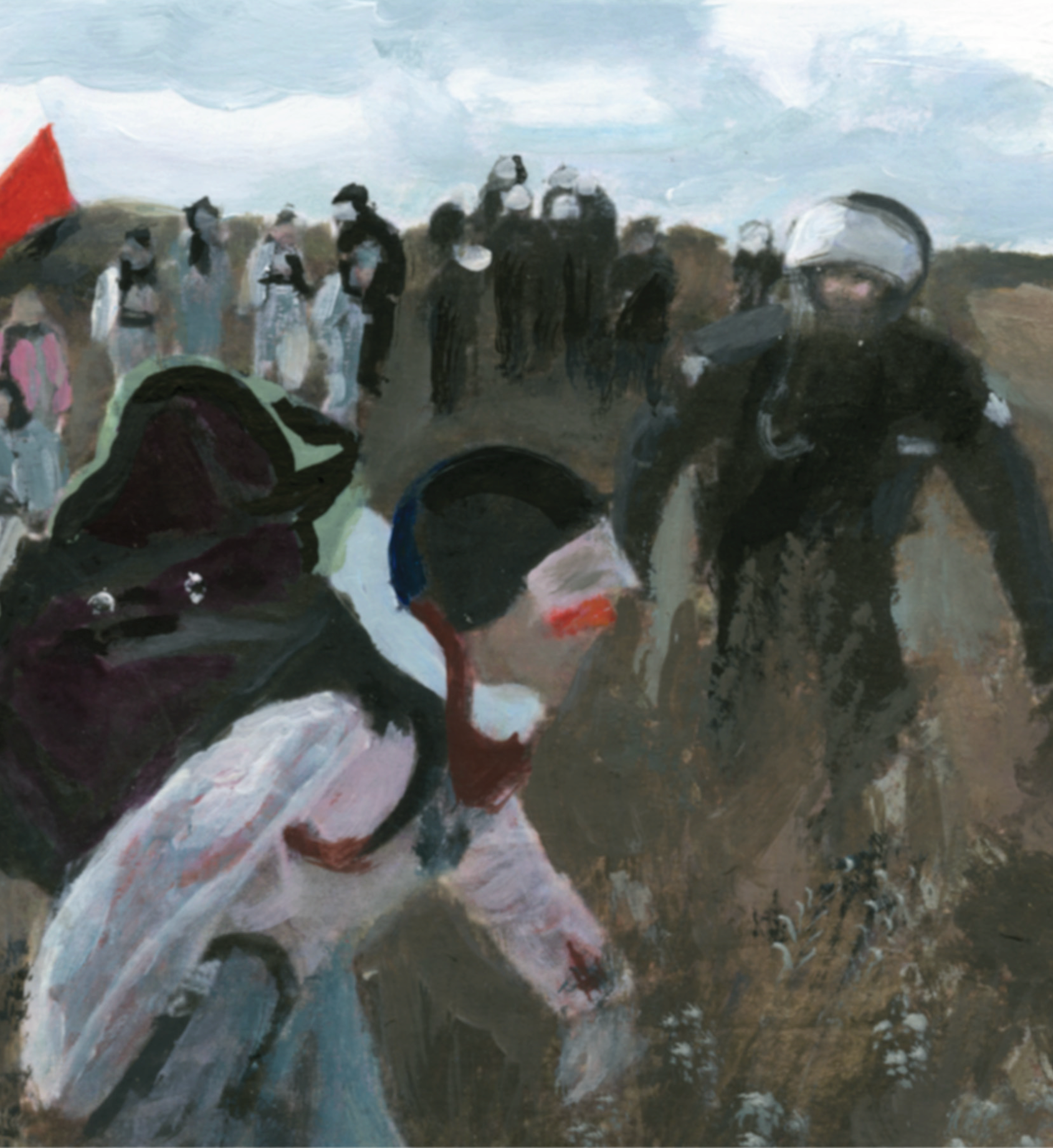 Next Section
Economic and political instability
Sign up for free